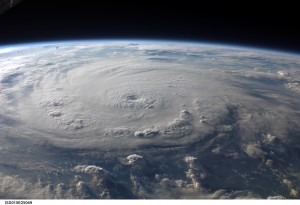 The important question about God regarding the problem of evil is: If God is Good, why does He allow evil?

Divergent explanations have been offered by different Christian philosophers and theologians for the occurrence of natural disasters. But here I confine myself to the most typical Christian explanation, before speaking of the Islamic view.

The problem in brief is this: If there is an All-loving God, how could He allow natural disasters to happen?

Kenneth Grider in his A Wesleyan Holiness Theology argues that “natural evils are not in each case God’s direct will, but occur through natural laws.”

According to him, God incarnated (in Christ) and became man, that is to say, He “came down to be metaphysically one-with-us”, and therefore knows our experiences first hand.

Thus, we can be certain that He will assist us in our efforts. We can know that God is….the Wholly Here, the Wholly Now; and since He is this, we can be assured that we will have His help in preventing involuntary frustrations. God thus rides in our machines when we build dams and levees. God rides with pilots out into the hurricane eyes hundreds of miles off the coast of Florida as they seek an early knowledge of a coming wind so that preparations for it can be made. God is predisposed to be with us whenever we seek to prevent natural evils. But whether God is with us for guidance, special revelational assistance, or other helps, a proper conception of the Incarnation assures us that He is always near and always humanly sympathetic. The Christian doctrine of the Incarnation, then, has only an indirect bearing on the theoretical problem of why natural evil exists, but it has a most direct bearing on the solution of the life-situation problem of preventing natural evil and of reacting to it creatively when it comes calling. (J. Kenneth Grider, Toward a View of Natural Evil, last accessed, 23 June, 2008)

From the Islamic point of view, there are a few problems with the above explanation, which posits the idea that certain things happen in this universe outside God’s will and plan. But in Islam both good and evil do necessarily have a place in the Divine Will and Plan.

The second point is about Incarnation. Islam firmly rejects the idea of Divine Incarnation. God is always God; and He never becomes one of His own creatures. He knows all the problems and experiences of His creatures; He is All-knowing, Wise; so He does not need to become a human to know how humans feel.

Islam teaches that God is All-Powerful, but it does not mean that He does things that contradict logic or does not befit His character. For instance, He does not make a round a square while keeping it round and square at the same time.

And it is also an Islamic teaching about God that He is Perfect and so He does not suffer or die; because that is against His nature.

The important question about God regarding the problem of evil is: If God is Good, why does He allow evil?

The answer is that a good God may allow evil if He has a good reason. And we need not know God’s reasons for allowing evil, because Allah says in the Qur’an that we are given only very little knowledge:

Therefore, it would be enough if we know of a possible reason for God to allow evil to exist. And from the Qur’an we can understand that Allah has given humans free will, in order to test them to prove who is better in good deeds:

One consequence of freedom is that humans may choose evil instead of good. But if they are forcefully prevented from choosing evil, there will not be any freedom. That is to say, God cannot have free beings whom He forces to choose only what is good; because, that would involve a logical impossibility.

As intelligent beings we know that most of the things that make life worth living require that we have free will. Moral responsibility, sense of individual achievement, satisfactory personal relationship, and so on, are a few valuable things that cannot be without freedom of choice.

But one may ask why natural evils like earthquakes are permitted, where free will has no part.

The answer is in the cause and effect nexus which is part of nature. We know that our actions are to a great extent motivated by the expectation of desirable results. This is possible only if our actions actually lead to results. Then only our actions become meaningful, and we can hopefully engage in good works.

We know fire is useful because it burns and helps us cook our food; but the same burning quality of fire can burn down homes. That is to say the very things that are useful for us can inevitably cause damage too. Now can we completely dispense with fire as it has a destructive side?

From the Islamic point of view, evil is like one of the twins, the other being good, as good on earth is ironically linked to evil. Because, good in this world cannot exist without bad, as they are two sides of the same coin and both are relative concepts.

For instance, to rescue a drowning man is good work; but this is possible only when someone is drowning, which is a bad thing. That is to say, we have a chance to do good work only when there is a need, which in itself is “evil”, or at any rate not “good”.

We replace that evil or the absence of good with good. The imperfections and shortcomings of this world provide ample opportunities for us to make creative efforts for improvement; and this makes our lives and work meaningful.

The forces of good and evil appear to work in opposite directions; but in the final analysis their work may be seen as a covert cooperation to fulfill the Divine plan. And we know, evil cannot be without God’s willing it to exist; and if so, evil has a role here to play.

In short, without evil, there is no good. And both are equally necessary for the spiritual development of man. For the spirit to grow, it has to overcome evil and do good.

Allah says in the Qur’an what means:

“Nor can goodness and evil be equal. Repel (evil) with what is better: Then will he between whom and you was hatred become as it were your friend and intimate! And no one will be granted such goodness except those who exercise patience and self-restraint, none but persons of the greatest good fortune.” (Fussilat 41:34-35)

That is to say, we must counter evil with good; but to do this, immense patience is necessary. As for a believer, good does not spoil him, nor does evil make him desperate.

We may say that a believer should have two kinds of patience: one in the face of moral evil; and another in the face of natural evil. Both kinds are required for spiritual development.

An example of moral evil is the insult a believer suffers from an arrogant person. Here the believer controls his anger with patience; and he is successful in the test.

An example of natural evil is a flood in which many people including children suffer. A believer in this context does not curse God; because he takes it as a test of his faith.

Instead, he goes out to help the victims in whatever way he can. And if he himself is a victim, he is patient and seeks forgiveness from God for his own failings and prays for protection. And thus he draws near to Allah and is successful in that test.

The Prophet (peace be upon him) said:

And Allah the Almighty admonishes:

“Nay, seek (Allah’s) help with patient perseverance and prayer: It is indeed hard, except to those who bring a lowly spirit….” (Al-Baqarah 2:45)

A believer has the conviction that all things and events are under the control of the Almighty and so he never loses hope. He trusts in the eternal benevolence and mercy of Allah, as He says in the Qur’an:

Professor Shahul Hameed is a consultant to the Reading Islam Website. He also held the position of the President of the Kerala Islamic Mission, Calicut, India. He is the author of three books on Islam published in the Malayalam language. His books are on comparative religion, the status of women, and science and human values.