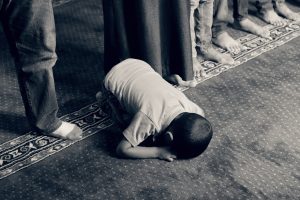 “And seek help in patience and as-salat (the prayer) and truly, it is extremely heavy and hard except for al-khashi’un. (They are those) who are certain that they are going to meet their Lord, and that unto Him they are going to return.” [Al-Baqarah 2:45-46]

There are similar texts reported from Mujahid. Al-Qurtubi and other scholars commented, “This is why Ramadan is called the month of patience,” as is mentioned in the hadith literature. It was also said that patience in the ayah means, refraining from evil, and this is why patience was mentioned along with practicing acts of worship, especially and foremost, the prayer.

Also, Ibn Abi Hatim narrated that ‘Umar ibn Al-Khattab said, “There are two types of patience: good patience when the disaster strikes, and a better patience while avoiding the prohibitions of Allah.” Ibn Abi Hatim said that Al-Hasan al-Basri was reported to have said similarly.

The prayer is one of the best means of assistance for firmly adhering to Allah’s orders, just as Allah said:

“Recite (O Muhammad) what has been revealed to you of the Book (the Qur’an), and perform as-salah. Verily, as-salah (the prayer) prevents al-fahsha’ (i.e. great sins of every kind), and al-munkar and the remembrance of (praising) of (you by) Allah is greater indeed.” [Al-`Ankabut 29:45]

The personal pronoun in the ayah, ” … and truly, it is extremely heavy and hard … ” refers to prayer, as Mujahid is reported to have said, and it was also the choice of Ibn Jarir. It is possible that the pronoun might be referring to the advice – to observe patience and the prayer – mentioned in the same ayah. Similarly, Allah said about Qarun (Korah):

“But those who had been given (religious) knowledge said: ‘Woe to you! The reward of Allah (in the Hereafter) is better for those who believe and do righteous good deeds, and this, none shall attain except as-sabirun(the patient).’” [Al-Qasas 28:80]

“The good deed and the evil deed cannot be equal. Repel (the evil) with one which is better then verily he, between whom and you there was enmity, (will become) as though he was a close friend. But none is granted it (the above quality) except those who are patient ـ and none is granted it except the owner of the great portion (of happiness in the Hereafter and) in this world.” [Fussilat 41:34-35]

Meaning, this advice is only implemented by those who are patient and the fortunate. In any case, Allah’s statement here means, prayer is ‘heavy and burdensome’.

Ibn Abi Talhah reported that Ibn ‘Abbas commented on this ayah, “They (al-khashi’in) are those who believe in what Allah has revealed.”

… continues the subject that was started in the previous ayah. Therefore, the prayer, or the advice to observe it is heavy, “ … except for al-khashi’in. (They are those) who are certain (yazunnuna) that they are going to meet their Lord … “, meaning, they know that they will be gathered and face their Lord on the Day of Resurrection, “ … and that unto Him they are going to return“, meaning, their affairs are all subject to His will and He justly decides what He wills.

Since they are certain that they will be returned to Allah and be reckoned, it is easy for them to perform the acts of obedience and refrain from the prohibitions. Ibn Jarir commented on Allah’s statement:

“Yazunnuna that they are going to meet their Lord … ”

Ibn Jarir said, “The Arabs call certainty as well as doubt, dhann. There are similar instances in the Arabic language where a subject, as well as its opposite, share the same name.

For instance, Allah said, ‘And the mujrimun (criminals, polytheists, sinners), shall see the Fire and dhannu (apprehend) that they have to fall therein.‘ [Al-Kahf 18:53].