April 21, 2020Prayer in Islam, Why We Pray?Awareness in prayer, catching the imam, FEATURED, ghazali books, Guide to Prayer, heart in prayer, how to make salah, how to Pray, humble in prayer, imam ghazali, khushu in salat, khushu` in prayer, life in prayer, namaz, Prayer, rulings of prayer, Salat, secret in salat, secret of prayer, spirituality of prayer, The Life in Prayer, why muslims prayby School Admin

These qualities can be expressed in many ways, but they are well summed up in six words, namely: awareness; understanding; reverence; awe; hope; shame. 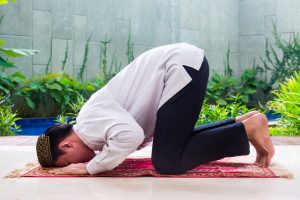 By conscious awareness we mean that state in which one’s mind and feelings are in no way distracted from what one is doing and saying. Perception is united with action and speech. Thoughts do not wander. When the mind remains attentive to what one is doing, when one is wholeheartedly involved, and when nothings makes one heedless, that is when one has achieved conscious awareness.

How many subtleties of meaning we have come to understand in the course of ritual prayer! Things that had never occurred to us before.

It is in this context that prayer becomes a deterrent to indecency and mischief, for the understanding it brings is a positive obstacle to vice.

As for awe, it is over and above reverence. In fact, it represents a kind of fear that grows out of the latter. Without experiencing fear, one will not stand in awe. There is an ordinary fear of things we find repugnant, like scorpions or bad temper, but this is not called awe. What we call awe is the kind of fear we have of a mighty king. Awe is the kind of fear induced by a sense of majesty.

As for hope, this is unquestionably something else again. There are many who revere some king or other, and who are in awe of him or afraid of his power, yet do not hope to be rewarded by him. In our prayers, however, we must hope for the reward of Allah, High Exalted; just as we fear His punishment for our faults.

As for shame, it is something additional to all the rest, for it is based on the realization of one’s deficiencies and the apprehension of sin. It is quite possible to conceive of reverence, fear and hope, without this element of shame.

For this reason the Mother of the Believers `A’ishah (may Allah be pleased with her) said: The Prophet used to do inside his house?” She answered: “He used to keep himself busy helping members of his family, and when it was the time for Salat (the prayer), he would get up for prayer.” (Al-Bukhari)

It is narrated that Allah Almighty said to Moses (peace be upon him): “O Moses, when you want to remember Me, remember Me in such a way that your limbs tremble and that you hold Me dear at the time of remembrance and rest satisfied. When you remember Me, keep your tongue behind your mind. When you stand before Me, stand before Me with fearful mind like the meanest slave and speak with Me with the tongue of a truthful man.” (Ahmad)

What Are The Virtues of Praying On Regular Basis?