Ramadan Is Not the End! It’s a New Start! 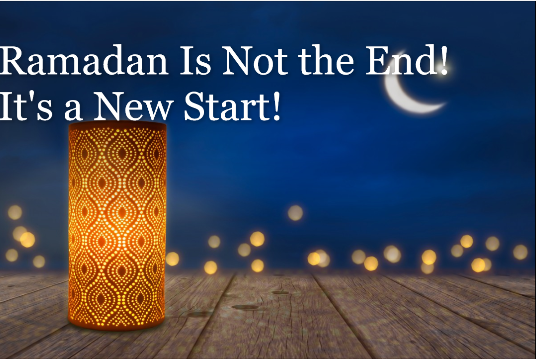 Kinds of people after Ramadan

The Blessed month of Ramadan during which Muslims have performed many acts of worship is now over. It acts as a witness for or against people. Those who spared no effort to observe as many acts of worship as they could must be ecstatic with happiness. They hope that the month is not only a witness but that it is also their intercessor on the Day of Judgment.

Those who spared no effort to observe as many acts of worship as they could must be ecstatic with happiness. This is because they have successfully completed their fasting. They hope that the month is not only a witness but that it is also their intercessor on the Day of Judgment. Moreover, they have got rid of their past sins.

Abu Hurairah (May Allah be pleased with him) reported: The Prophet (ﷺ) said, “He who observes fasting during the month of Ramadan with Faith while seeking its reward from Allah, will have his past sins forgiven.” (Al-Bukhari and Muslim)

The same reward is granted to those who also performed the tarawih (night prayer). Every Muslim who observed fasting and tarawih prays to Allah to accept their good deeds.

2. The Most successful ones

Out of precaution, good people fear that their actions are not accepted because of likely shortcomings that may be there in their worship. That’s why they ask Allah to accept their fasting, tarawih, recitation of the Quran, giving in charity and the other good deeds they have performed.

It was narrated that ‘Aishah said: “I said: ‘O Messenger of Allah,

“And those who give that (their charity) which they give (and also do other good deeds) with their hearts full of fear.” (Quran 23:60)

Is this the one who commits adultery, steals and drinks alcohol?’

He said: ‘No, O daughter of Abu Bakr’ – O daughter of Siddiq – rather it is a man who fasts and gives charity and prays, but he fears that those will not be accepted from him.’” (Ibn Majah and Al-Tirmidhi)

Ibn kathir and Al-Albany declared this Hadith as authentic.

On the other hand, there are others who are happy because Ramadan is over. They do not like it to perform fasting and other acts of worship. Those lazy people often neglect performing the compulsory acts of worship. That’s why one can find the number of Muslims observing prayer in mosques decreases after Ramadan.

Such people should ask themselves whether their deeds are accepted. They should be truthful if they really seek Allah’s forgiveness and mercy.

There are signs that denote that one’s good deeds are accepted. One of these signs is that one finds themselves more steadfast and unwavering in abiding by the rituals of Islam. The progress in worship and behavior Muslims make by the end of Ramadan denotes their success in benefitting from Ramadan.

On the contrary, there are people who have not made any progress. They are still lazy to do acts of worship. Thus, their condition after Ramadan is the same as or even worse than before it. This denotes non-acceptance of their worship.

In fact, they have not seized the opportunity to gain the great rewards of the blessed month. They may not have the chance to live until the next Ramadan. We ask Allah, Almighty, to guide such people to repentance and to shower them with His mercy.

Worship is not over after Ramadan

If the month of Ramadan is over, this does not mean the time of worship is over. Allah says,

We can understand from this aya that one should continue to worship Allah as long as he is alive because no one knows the specific time of his or her death. It’s everyone’s hope to die while they are in the best state of maintaining the rituals of Islam and closeness to Allah. To achieve this goal, one should consider the following aya. Allah says,

“O you who believe! Be ever God-fearing, with a fear justly due Him. And do not die, except while you are muslims, in willing submission to God (alone).” (Quran 3:102)

When interpreting this Aya, Imam Ibn Kathir, the great commentator of the Quran, said, “Preserve your Islam while you are well and safe, so that you die as a Muslim. The Most Generous Allah has made it His decision that whatever state one lives in, that is what he dies upon and is resurrected upon. We seek refuge from dying on other than Islam.”

In fact, good deeds should still be observed all the year round. Fasting, performing night prayer, reciting the Gracious Quran, giving in charity, making du’aa (supplication) and enjoining what is good and forbidding what is evil are just a few examples. Let us look at one or two of these kinds of worship!

Although fasting is compulsory in Ramadan, it is still recommended in the other months. In Shawwal, it is recommended to fast six days.

Abu Ayyub (May Allah be pleased with him) reported:

One can start to perform those six days from Shawwal 2 because it is prohibited to fast the first day of Shawwal. They may be observed consecutively or separately during the month.

The other supererogatory fasts

The other recommended fasts during the year include fasting on Mondays and Thursdays, and for three days every month, the 13th, the 14th and the 15th.

The Prophet (blessings and peace of Allah be upon him) would also encourage Muslims to do more acts of worship on the first nine days of Dhul-Hijjah, the 12th month in the lunar calendar. This includes fasting on those days. Moreover, the reward for fasting on the Day of Arafat, the 9th day of Dhul-Hijjah, is the forgiveness of the sins of two years, one before and one after that day. It should be noted that it is not recommended for the pilgrim to fast the Day of Arafat. The reward of the pilgrim for standing on Arafat and doing other acts of worship is the forgiveness of all past sins. So, the pilgrim does not fast on that day to be better able to do more acts of worship.

It is also highly recommended to fast a lot of days of Al-Muharram, the first month in the lunar calendar. Fasting the 10th day of Al-Muharram forgives the sins of the previous year. Also, Prophet Muhammad (blessings and peace of Allah be upon him) used to fast most days of Sha’ban.

The night prayer is not exclusively recommended in Ramadan. It can still be performed at every night of the year.

The Messenger of Allah (ﷺ) as saying: The most excellent fast after Ramadan is Allah’s month al-Muharram, and the most excellent prayer after the prescribed prayer is the prayer during night. (Muslim)

The night prayer is one of the best acts of worship that brings the Muslim closer to Allah. In addition, it is a symbol of goodness and excellence. Allah says,

Reciting the Gracious Quran should be part and parcel of the Muslim’s everyday life. There are several ayat (verses) from the Quran and many hadiths that encourage Muslims to read the Quran, study its meanings and reflect upon its admonitions. The Muslim should spend some time to do this even if it is ten minutes. Allah says,

“Indeed, those who recite the Book of God, and who (duly) establish the Prayer, and who spend (charitably) from what We have provided them, secretly and openly- they have hope in a (blessed) transaction that shall never come to ruin- that He may give them their rewards (in full) and increase them evermore from His bounty. Indeed, He is all-forgiving, ever-thankful.” (Quran 35: 29-30)

There are a lot of other acts of worship which every Muslim should do a share of it. May Allah accept our and your good deeds! Ameen!

Those Who Have Abandoned the Prayer