Islam and the Meaning of Deen

The word ‘deen’ is used in several meanings. The first is sovereignty, power, lordship, kingship, or rulership. The second is the opposite of this, i.e. submission, obedience, service or slavery. The third is to bring to account, to judge, or to dispense reward and punishment for actions. All those three uses are found in the Qur’an.

Here, deen is that way of life in which we recognize Allah alone as the possessor of all power and majesty and surrender ourselves to Him. We must not abase or humble ourselves before anybody save Him. We must regard only Allah as Master, Lord, and Sovereign, and must not be slaves or servants to anybody but Him. We must accept only Allah as the Lord of reward and punishment. We should covet no reward, fear no punishment, except His. Islam is the name of this deen. 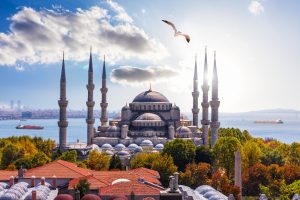 Deen is that way of life in which we recognize Allah alone as the possessor of all power and majesty and surrender ourselves to Him.

False deen arises when you ascribe real powers to anyone besides Allah, when you take anyone as a real ruler and master, as a dispenser of real reward and punishment, when you bow your heads before him in humility, when you serve him and obey his orders, when you covet his reward and fear his punishment more than Allah’s. This kind of deen Allah never accepts because it is totally contrary to reality.

No other being in the whole universe except God possesses any power and might, nor does anybody else’s sovereignty and kingship exist. We have not been created to be servants and slaves of anyone or anything but God, nor is there anyone else except that real Master who can judge us and award reward and punishment.

In many places in the Qur’an these facts have been explained.

And whoso seeks a Deen other than Islam, it will not be accepted from him. (Aal `Imran 3:85)

Thus, anyone who disregards the sovereignty and kingship of God, acknowledges someone else as his master and ruler, becomes his servant and slave, and considers anyone as a dispenser of reward and punishment in his own right, will never have his Deen or conduct accepted by God because:

They were not enjoined anything but that they should serve God, making submission exclusively His, turning away (from all false gods). (Al-Bayyinah 98:5)

God has not created human beings to serve anyone except Himself. It is, therefore, incumbent on them to turn away from all false gods and reserve their submission, or their true deen, for Allah alone. They should single-mindedly devote themselves to His service and consider themselves as being accountable only to Him:

What! Do they seek a deen other than God’s, whereas unto Him surrenders whatever is in the heavens and on earth, willingly or unwillingly, and unto Him all must return? (Aal `Imran 3:83)

How can we human beings incline to be servants and to submit to someone other than God, when all other things on earth and in the heavens are slaves and obedient servants of God alone, accounting for their deeds to no other authority than God? Does man want to adopt a deviant way for himself, some kind of independent and autonomous existence, in defiance of the entire universe?

He it is Who has sent forth His Messenger with the Guidance and the way of Truth, so that he makes it prevail over all ways (religions), however much mushriks (who take gods besides God) may dislike it. (At-Tawbah 9:33)

Allah has sent His Messenger with the true deen for the purpose of ending the sovereignty of all false gods and granting us immense freedom so that we live as servants of none but the Lord of the universe, no matter how much the idolaters and polytheists may dislike or oppose such a course.

And fight them, until there is no rebellion (against God) and all submission is to God alone. (Al-Anfal 8:39)

Thus these three meanings of deen stand out:

– To acknowledge God as Lord, Master and Ruler.

– To obey and serve only Him.

– To be accountable to Him, to fear only His punishment and to covet only His reward.

Deen also includes obedience to God’s Messengers. For the commandments of God have been given to human beings through His Books and His Messengers.

Children of Adam! If there should come to you Messengers from among you, who convey My revelations unto you, then whosoever refrains from evil and lives rightly no fear shall be on them, and neither shall they sorrow. (Al-A`raf 7:35)

Hence, whoever acknowledges Allah as Ruler can be accepted as obedient to Him only when he becomes obedient to His Messengers and lives by the guidance received through them.

Deen consists of these fundamental principles.

The article is an excerpt from Abul A`la Al-Mawdudi’s Let Us Be Muslims.

Da`wah: Why Is the Prophet Our Best Example?