April 21, 2020Prayer in Islam, Why We Pray?Al-Fatihah during salat, bowing, Devotion in Various Acts in Prayer, effects of khushu`, FEATURED, How to improve Khushu in Salah, how to make salah, how to Pray, how to pray with khushu`, humbleness in prayer, humbleness in salah, ibn al-qaiym, khushu, khushu` in prayer, khushu` in salah, namaz, pray with khushu, Prayer In Islam, prostration, Ruku`, salah, Salat, sujudby School Admin

The devotion of standing upright before Allah in prayer comes into effect when the slave devotes his attention to the Greatness of Allah and His Attribute of Self-subsistence, as this will ensure that he turns neither his face nor his eyes from side to side.

The devotion of the statement “Allah is the Greatest” by which the slave commences the prayer is realized when the slave devotes his attention and focus to Allah’s greatness, glory, and exaltation. 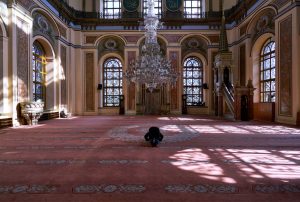 Opening Supplication: The devotion of the opening supplication happens when the servant extols and glorifies and praises Him profusely, ascribing to Him all that befits Him and declares His transcendence above everything that does not befit Him, and praises Him for His Attributes and Perfection.

Ta`awudh (seeking Allah’s protection from Satan): The devotion of taking refuge in Allah from the accursed Satan is realized by having confidence and faith that Allah shall support him, protect him and aid him against Satan.

Recitation: The devotion of reciting the Qur’an lies in the slave’s endeavor to learn about Allah through His Words as if trying to see Him through His revelation. One of the righteous Salaf said: Allah manifests Himself to His slaves through His Speech (i.e. Qur’an). It is, however, the case that the degree of devotion while reciting and praying varies from one person to another, and the difference between them is like the difference between the one whose both eyes are sound and unimpaired, and the one-eyed individual, the blind person, the deaf person, etc. in their levels of perception. The slave should be as heedful as possible to His Essence, Attributes, Actions, Commandments, Laws, and Names.

Raising up from the ruku`: After he rises up from his bowing stance, he should focus his attention upon glorifying and praising Allah repeatedly, so as to manifest his servitude to Him, the One in whose Hand is the sole authority to bestow and deny.

When the servant falls into prostration, he ought to focus his attention on feeling his nearness to Him, overwhelmed in humility in the hope that He forgives him, guides him, sustains him, protects him and bestows His mercy upon him. Then, when he raises his head and adopts the sitting posture, his inner condition takes on a different nature, one that is similar to the condition of the pilgrim when he performs the last circumambulation because at that point, his heart begins to realize that he is about to complete his prayer and with it leave this blessed condition that he is experiencing and that soon he will be returning to the dreariness of his worldly affairs that he had detached himself from just before standing before his Lord. Once again he will be subject to the feelings of pain and anguish that his heart endured before he started praying, all of which melted away as soon as he commenced his prayer. At that point, his heart rushes to enjoy the nearness of Allah for the last time, to bask in His grace, and to be saved from the disruptiveness of his worldly affairs.

The feeling of bitterness he endures is due to his recognition that all this lasts only as long as he is praying. At this stage, the heart cannot but feel burdened and troubled knowing that all this is about to end and that he is about to return to these worldly affairs and concerns. This agitates the slave to the point that he starts wishing that this prayer were the final act of his life. Not to mention the slave’s awareness that as soon as he finishes praying, he will resume communicating with those who bring him nothing but concerns, worries, and harm after he had been invoking and supplicating his Lord. However, this kind of feeling cannot be experienced except by those whose hearts are alive with the remembrance and love of Allah and who are cognizant of the negative effect that mankind leaves on their hearts. This is because interacting with people puts him in the way of harm and worries, agitates his heart and makes him overlook or miss good deeds, not to mention causing him to commit more sins. More importantly, it distracts him from invoking Allah, the most High.

Source: Quoted with slight modifications from Ibn Al-Qaiym The Inner Dimensions of the Prayer

The Secret of Prayer Lies in Devotion to Allah