Allah has blessed us with a religion that is complete and perfect for all times and places.  Allah tells us in the Qur’ān:

Whatever problem or issue a Muslim is facing, he returns back to Allah and his Messenger for guidance; there is nothing that happens in the life of a Muslim except that his religion has a solution to it. 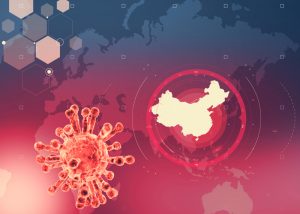 The coronavirus is a reminder to us all of our weak state. Regardless of our social standing and our financial position, we are helpless.

We recently heard about the coronavirus which is spreading to a number of countries, affecting the lives of many people, causing death to others.

There are a number of thoughts that should cross the mind of a Muslim when they hear something like this. Below are some points that a person must remember and internalise when they see or hear of such incidents:

Trials and tribulations are part of life, this is something that Allah informs us of and warns us so that when we are afflicted, we remember that it is ultimately Allah who controls of our affairs. It is He who will provide help and His knowledge of our affairs surpasses our restricted intellect. As He says in the Qur’an:

“Do you think you that you will enter Paradise without such [trials] as came to those who passed away before you? They were afflicted with severe poverty and ailments and were so shaken that even the Messenger and those who believed along with him said, ‘When [will] the Help of Allah [come]?’ Yes! Certainly, the Help of Allah is near!” (Quran 2:214)

Allah says in the Qur’an:

“And We will surely test you with something of fear and hunger and a loss of wealth and lives and fruits, but give good tidings to the patient” (Quran 2:155)

So how do we respond to a calamity? Allah tells us immediately after the previous āyah:

A Muslim is patient in trials; he knows Allah will never forsake him, nor will Allah burden him with a trial that is more than what he can handle.

This is not something new

Illnesses and viruses such as the coronavirus are not something new, nor is the fact that people are afflicted with illnesses.

The companions once asked the Prophet (peace be upon him):

We see the great Prophet of Allah, Ayyūb (peace be upon him),اwas tested with a great illness.  His story is synonymous with patience. He lost everything; his family, wealth, and health. Some narrations say he was bedridden for 18 years, tested with a great illness, yet we find he did not give up hope in Allah and turned to him in this great trial.

Allah tells us his story in the Qur’an:

“And Ayyūb, when he called to his Lord, saying ‘Harm has inflicted me and You are the Most Merciful” (Quran 21:83)

“So We answered him and removed his affliction and We gave him his family and the like of them with them, as a mercy from Us and a reminder to Worshippers.” (Quran 21:84)

The story of Prophet Ayyūb (peace be upon him) is one filled with lessons for us to ponder over. The virtue of patience is shown to us in the Prophet Ayyūb (ʿalayhi al-Salām) through some of the most dire situations that one can come across in life.

The concept of pre-destination is extremely important for a Muslim to understand.  When incidents such as the coronavirus occur, a Muslim should know that this is what Allah had decreed 50,000 years before the creation of the universe. The Prophet (peace be upon him) explained:

“Allah had written the ordained measures (and due proportions) of the creation, fifty thousand years before the creation of the heavens and the earth…” (Muslim)

Allah will never harm us nor does he want evil to befall us. We may think something is bad for us due to our restricted view of life, but there is always good in a situation. Allah tells us that perhaps you hate a thing but it is in fact good for you, and perhaps you love a thing when in reality and it is bad for you, yet Allah knows while you know not!

A believer has two positions when it comes to pre-destination: one is before the situation occurs, and one is after. Before the situation he seeks help from Allah, makes dua to him, and relies upon him; he asks Allah for good to come from it.

After the situation, if the result was positive and good the person thanks Allah.  If the event had a negative outcome the person is patient because he knows that Allah will never forsake him even if it seems the result is negative, because indeed Allah is the best of planners.

A Muslim should not overreact; at the same time he should not be oblivious about a situation and do nothing!

Taking the necessary means and then relying upon Allah is something which is emphasised in Islam.

“One day Prophet Muhammad (peace be upon him), noticed a Bedouin leaving his camel without tying it. He asked the Bedouin, ‘Why don’t you tie down your camel?’ The Bedouin answered, ‘I put my trust in Allah ’ The Prophet then said, ‘Tie your camel first, then put your trust in Allah ’ (Al-Tirmidhi)

We also find in the incident of Umar (may Allah be pleased with him) taking necessary precautions is a must when you know of a harm or potential danger that could afflict you.

Umar ibn al-Khattab was traveling with a group of companions during his reign. They approached a town in which it was said had a contagious/infectious disease. Umar asked his group whether they should proceed or return (to Madinah). The majority of the companions said they should go back but some said they should proceed. Then one companion said he knew a hadith where the Prophet (peace be upon him) said, “If you hear that this disease (plague) exists in a country, do not travel to that country.” So Umar decided that they should go back. Another companion asked him whether he was running away from qadar. Umar replied that they were moving away from one qadar to another qadar.

Whenever there is a problem, a challenge, or any hardship which we can remove, overcome, solve, or minimise, we must do so.

Many of the health guidelines given by the NHS are in fact normal practices for Muslims, some of which are as follows:

1. Washing hands: this is a part of ablution, a Muslim’s daily ritual of purity.

The Prophet (peace be upon him) said:

“Cleanliness is part of faith” (Muslim)

Keeping our surroundings tidy, cleaning up after ourselves, and wiping surfaces down are all aspects of cleanliness which must be adhered to in these situations.

3. Covering your mouth when sneezing

The Prophet would cover his mouth when he sneezed. This basic etiquette can take big part in the stopping of the spread of viruses

“Whenever the Messenger of Allah (peace be upon him) sneezed, he would cover his mouth with his hand or a piece of cloth.” (Abu Dawud and Al-Tirmidhi)

4. Quarantine in times of viruses which can spread.

The Prophet gave instructions on what to do if there is an outbreak. Abd al-Rahmān ibn ‘Awf  that he said:

“I heard the Messenger of Allah (peace be upon him) say: “If you hear that it (the plague) is in a land, do not go there, and if it breaks out in a land where you are, do not leave, fleeing from it.” (Al-Bukhari and Muslim)

The Prophet (peace be upon him) also taught us how to protect ourselves by maintaining our adhkar from the Sunnah. One such dua that he taught us was:

“In the name of Allah with Whose name nothing can harm on earth or in heaven, and He is the All-Hearing, All-Knowing” (Abu Dawud, Al-Tirmidhi and Ibn Majah)

Being positive and having an optimistic outlook

Always have a positive outlook regardless of the situation you’re in, this is what our Prophet Muhammad (peace be upon him) taught us, when he told us

“There are no omens, but the best of it is optimism” (Al-Bukhari and Muslim)

When we look through the seerah we find many examples of the Prophet (peace be upon him) being optimistic event though he was in a dire situation.

We should also not blame others or ridicule them because they are from a certain country or they have come from a part of the world that has been affected by the virus. Unfortunately, we have seen physical attacks on people, racist remarks made, and people making a joke and mocking the situation people are in.

The coronavirus is a reminder to us all of our weak state. Regardless of our social standing and our financial position, we are helpless. Allah says:

Situations like this remind us to turn back to Allah.  Allah controls everything and he is the one that can relieve us from our difficulties, we must return to Allah and seek refuge in him and ask his protection.

Source: www.islam21c.com with some modifications

In Quran I Found Answers to All My Questions

The Distorted Image of Muslim Women