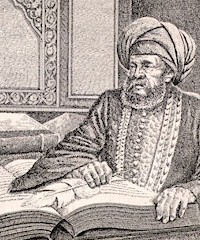 Amazingly, like Braille, Al-Amidi too was blind from childhood. It is a well known fact that, “the tactile receptors of blind peoples’ fingers are exceptionally well developed and Al-Amidi was also gifted in this ‘super-sense’.”

The history of Muslims is abundant in numerous, if not countless, prime examples of scientists, scholars, thinkers, philosophers, reformers, inventors, etc. The remarkable achievements of such pioneering prominent figures are beyond counting. However, many of these achievements are not recognized nowadays as have been carried out by Muslims. This can be attributed to the fact that many Arabic names of the original owners of such magnificent contributions were “naturalized” from Arabic and morphologically changed in a way to make them look like ancient Greek names. Therefore, the Arabic reader should not mistake them for English names, e.g.: Avempace (Ibn Bajah),[1] Avenzoar (Ibn Zuhr),[2] Averroes (Ibn Rushd),[3] Avicenna (Ibn Sina),[4] Saladin (Salah Ad-Din),[5] etc.

More interestingly, I was reading something about the Mamluke era in Egypt and the Levant recently. I came to know that that particular era is conceived to be void of any significant contribution by some Orientalists and others. They claim that the only achievement of that era was one book by one scholar; namely, “Al-Muqadimmah” by Ibn Khaldun.[6] In fact, these claims were proved groundless as the Mamluke era witnessed many scientific and scholarly achievements as well as a huge cultural boom that can be compared to the renaissance enjoyed by the whole Muslim world for centuries. This is very true despite long-term wars, revolutions, afflictions and turmoil that were then prevalent. Interestingly enough, the cultural and knowledge-based aspects of society were not affected in the same manner. Hundreds of manuscripts and books attest to the then existence of a galaxy of scholars and scientists who crowned that era with their amazing achievements. Many of these books and manuscripts survived and thus can nowadays be found in famous world libraries in Dublin, London, Leiden, Istanbul, Cairo, and many others.[7]

One of the main reasons that led to that civilizational boom and cultural boost was the fact that many Muslim scholars and scientists fled to Egypt when the Tatars invaded the Muslim world and demolished Baghdad in (1258 A.C.). Egypt was then a safe-haven for so many; a matter which enabled them to achieve whatever scientific and scholarly contributions they opted for.

Many of the books and manuscripts that survived the Mamluke era contain valuable information and details of the discoveries and contributions that first appeared at that time. This encompasses innovations in the fields of education, linguistics and lexicons, medicine, mathematics, geography, astrology, social and religious studies, etc. One of the most outstanding discoveries of that era was the invention of a writing system for visually impaired or sightless people. Such a system is basically needed to help the blind read and play an active role in the cultural life of the community as well as the whole human race.

Ironically, when this last issue is often raised, the name Braille is solely mentioned as the first to invent such a system. Before getting any further, let us learn something about Braille. 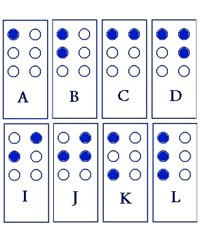 Braille, Louis (1809-1852), French teacher of the blind. Born in Coupvray, France, he was blind from age three. In 1829, while teaching at the National Institute for the Young Blind in Paris, Braille conceived the idea of modifying the so-called point writing system, used for coded army messages, to enable the blind to read.[8]

The Alphabet he devised, called the “Braille Alphabet”, consists of 63 characters made up of a series of six dots raised on paper so that they can be read by passing fingers lightly over the manuscript. The dots are conventionally numbered 1, 2, and 3 from the top of the left column and 4, 5, and 6 from the top of the right column. The presence or absence of dots gives the coding for the symbol.[9] Remarkably, a universal Braille code for the English speaking world was adopted in London in 1932. Braille is now used throughout the English-speaking world and has been adapted to most other languages including Arabic.

However, historical records attest to the fact that it was Al-Amidi (d. 1314 A.C.), who was the first to invent such a writing system 600 years before Braille. Ali Ibn Ahmed Ibn Yusuf Al-Amidi, a Syrian Muslim, was considered an expert in using such a system. Amazingly, like Braille, Al-Amidi too was blind from childhood. It is a well known fact that, “the tactile receptors of blind peoples’ fingers are exceptionally well developed and Al-Amidi was also gifted in this ‘super-sense’.”[10] This enabled him not only to locate books on shelves using the sense of touch, but also to recognize each book’s number of pages. He could also determine the value of the books by the spacing of the lines. Whenever he went to purchase a book he would always take with him a piece of paper. He would roll the paper into the shape of a letter of the alphabet. He would then stick that piece of paper onto the front cover of the book in a way that would enable him afterwards to identify the book’s title, author, price, number of pages, etc., just by touching the letter-shaped piece of paper as it was part of a code that he himself had developed to classify books.

This, in fact, was the real beginning of a writing system especially designed for the visually impaired almost 600 years before the birth of Louis Braille. Ironically, this fact is hardly recorded or not mentioned at all in the books of history.

[1] Avempace (in Arabic, Ibn Bajah) (1095?-1138), Muslim philosopher and exponent of Neo-platonic intellectual mysticism who was born in Andalusia (now Spain). His famous book, On the Union of the Intellect, is a very important contribution to the field of mysticism and Muslim intellectualism.

[2] Avenzoar (in Arabic, Ibn Zuhr) (1090-1162), Muslim physician and writer who was born in Andalusia (now Spain). Ibn Zuhr’s Practical Manual of Treatments and Diet showed an advanced understanding of the human body based on science rather than speculation.

[5] Saladin (in Arabic, Salah Ad-Din) (1137-1193), Muslim ruler of Egypt and Syria who liberated Palestine, restored Muslim sovereignty over the sacred city of Jerusalem (in Arabic, Al-Quds), and defended it during the Third Crusade (1189-1192).

[6] Ibn Khaldun, full name Abu Zayd Abd-Ar-Rahman Ibn Khaldun (1332-1406), medieval Islamic historian. He was born in Tunis (now in Tunisia). In the 14th century he completed his monumental work Muqaddamah, the introductory volume to his Universal History, which is a valuable guide to the history of Muslim North Africa and the Berbers. In the Muqaddamah Ibn Khaldun outlined a philosophy of history and a theory of society that are unprecedented in ancient and medieval writing. Societies, he believed, are held together by the power of social cohesiveness, which can be augmented by the unifying force of religion. (The Encarta Desk Encyclopedia (1998). Microsoft Corporation. Electronic version).

[7] I have visited some of these libraries in the last 10 years or so.

[9] The Foundation for Science, Technology and Civilization (www.muslimheritage.com).

Dr. Ali Al-Halawani is Assistant Professor of Linguistics and Translation, Kulliyyah of Languages and Management (KLM), International Islamic University Malaysia (IIUM), Kuala Lumpur, Malaysia. He was Assistant Professor and worked for a number of international universities in Malaysia and Egypt such as Al-Madinah Interanational Univerity, Shah Alam, Malaysia (Mediu) and Misr University for Science & Technology (MUST), Egypt; Former Editor-in-Chief of the Electronic Da`wah Committee (EDC), Kuwait; Former Deputy Chief Editor and Managing Editor of the Living Shari`ah Department, www.islamOnline.net; Member of the International Union of Muslim Scholars (IUMS); and member of the World Association of Arab Translators & Linguists (Wata). He is a published writer, translator and researcher. You can reach him at [email protected].